The April 26, 2019 issue of the Everett Advocate highlights Relay Power’s role in bringing Community Solar to Everett, MA, and describes how the program is a win/win for the City as well as it’s residents.

Read the pdf below or at the Advocate’s link. 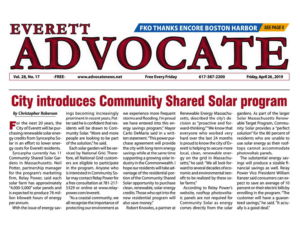 See how you can help Fight Climate Change by joining a Community Solar Farm.

There are a slew of major companies that have been choosing to invest in solar this year. Corporate responsibility is becoming more important to consumers, plus it makes financial sense.

The online shopping giant installed solar panels at its fulfillment centers in the U.K., producing enough to power 4,500 homes and offsetting 6,000 tons of carbon dioxide every year. And although it’s not solar, they’re also going green by purchasing the power produced by three wind farms to power data centers. “The new trio of wind farms will add to Amazon’s existing portfolio of nine utility-scale renewables projects, totaling more than 1,000 megawatts. AWS has a long-term target of reaching 100 percent renewables across its global footprint, and is already halfway there.”

Disney has pledged to cut its carbon emissions in half by 2020 – to that end, they’ve installed a solar field capable of producing over fifty megawatts. That’s enough to meet 25% of Disney World’s power needs.

Starbucks has partnered up with Cypress Creek to invest in several solar projects. These developments will produce 70 megawatts, enough to power 360 cafes in Texas. The coffee chain had previously used a similar model, investing in a project in North Carolina to power 600 stores.

Walmart has installed about 150 megawatts of solar, with the goal of reducing their emissions by one billion metric tons by 2030.

Target might take the cake, with a whopping 203.5 megawatts of solar installed. They have also worked to bring over 1,000 of their stores up to the Energy Star standard, and report their carbon emissions each year to the Carbon Disclosure Project.

There are many more big names that are investing in solar – Ikea, Apple, Kohl’s, and Costco, to name a few. Solar isn’t just for hippies or do-gooders, it just makes financial sense, and more and more companies are making the switch.

There’s no question that solar is booming. Over the past ten years, the industry has seen an “…Average annual growth rate of 50%…” and now employs over 242,000 people in the United States. Even with this boom, there is still a huge amount of unmet need when it comes to solar. Rooftop solar installers and community solar companies can work together to move the country towards a clean energy future. In fact, a number of rooftop solar companies profit by referring customers to community solar when they can’t or won’t install on their home.

A recent survey of solar installers revealed that traditional rooftop solar installers don’t view community solar as competition. In fact, rooftop solar companies had a overwhelmingly positive response to community solar. That’s because community solar serves different customers that rooftop can’t. According to the US Census, about forty percent of Americans live in housing that would not support a solar array. And even for those who do, obstacles like finances, structural concerns and shading prevent a majority of customers from taking advantage of the environmental and financial advantages of rooftop solar. Community solar can fill this gap, removing financial and siting obstacles that customers face when looking to make clean energy choices.

The survey also points out another major benefit to community solar. Having large public arrays like the ones along the Massachusetts Turnpike help to normalize solar. The more arrays there are, the more people will think of solar as a regular fact of life, rather than a futuristic and expensive pipe dream. These arrays can act as advertisement too, sparking interest for both potential rooftop and community solar customers as they pass by them.

We’ve Only Scratched the Surface

There’s good synergy between rooftop solar installers and community solar, and the market is still mostly untapped. In 2018, the United States only got 1.6% of its electricity from solar, while 76% of voters support increasing solar capacity. Both types of solar should find ways to work together to transform our energy grid.

If your rooftop solar company would like to learn how to profit from community solar, Learn More

And nearly everyone can help Fight Climate Change by joining a Community Solar Farm.

Incentive-free solar projects are becoming more common. Unsubsidized developments in favorable climates like southern Europe have already achieved price parity with other types of energy, and the falling cost of solar installations is making this feasible in more places.

It’s clear that even in snowy northern climates, solar is a viable option. And as costs continue to come down, more and more solar won’t need assistance, subsidies or incentives to compete with fossil fuels.